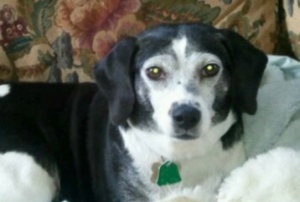 About ten years ago, two months after our beloved beagle, Annie, went to that big dog bone market in the sky, I decided I could no longer bear living in a house without a dog. My daughter, married and and mom to my two perfect grandsons, concurred and began “shopping” via the internet at  local Pet Shelters.

“Mom,” she would say. “You should see Precious. What a doll—I think she’s perfect for you.” I’d check Precious out on-line and say something like “nah uh—no Great Danes.”

After two months of that, and a few trips to the shelter to no avail, we happened upon a little girl dog at a local kennel. Her name, sweetly enough, happened to be”Sugar,” and she was everything we could have wanted. Cute, fluffy, small, and housebroken. I jumped into the car and made a bee line to Spencer’s Kennel only to find that Sugar had already departed with another happy family and once again we were left dog-less. “Rats,” said I to the woman working behind the counter. “I really thought Sugar as the answer to our empty dog bed dilemma.”

“What exactly are you looking for in a dog?” she asked. “They come and go so fast, but if you tell us what you’re looking for, I’d be happy to call you.”

It took no thought at all. “I don’t have many conditions.” I said. “Actually only two. Number one—NOT A BEAGLE. We have had a beagle and that one was enough for a lifetime. We are, after all, not as young as we used to be. And the second condition is that it not be a boy. Girl dogs are just so…so sweet and boy dogs are so rambunctious.”

“Wow. That’s really too bad. We only have one dog left today, and that one is a no-go for you. A boy mixed/beagle.” She pointed her finger out the window to the fenced in grassy area in the back yard. There, laying in the sun, was a little black and white boy beagle who we later learned was named Petey. He stretched, rolled around on the grass a bit, stood up and looked me right in the eye.

“It’s funny. Petey’s been here over a month. He has a wonderful personality, but always gets passed over. I guess people are looking for something a little flashier.”

I looked out the window again. He was really kinda cute. Not too big and not too small. Oh, sure he was a beagle. But beagles aren’t really all that hard to catch when they decide to chase a raccoon into the woods. He was a boy which was a strike against him. But he was so cute. And he was looking me right in the eyes.

“Well, maybe I’ll bring my grandkids by after school  and let them meet Petey and see what they say.”

You’ve guess the rest, I bet. The boys loved him. He loved the boys. I was buying dog food and chew toys before I fully comprehended that we were bringing a boy beagle into our life. Of course the name had to go. My son-in-law, Pete, would insist on that. So, Petey became Willie (that’s another story for another time). Middle name Acorn. (The boys insisted, It was Fall and the acorns were falling on their heads and they thought it was a terrific name for our new dog.) And chaos ensued in our little home in the country.

You may think it’s a bit of a stretch to relate getting a dog to writing, but there is a parallel here. I went into the Kennel with a preconceived idea—and came out with something totally different and better than I could have dreamed. When you plot you have your preconceived idea, but when you sit down at the computer, your imagination says “Pick a beagle…forget that safe poodle. Go wild.” And you may come out with something totally different and better than you first dreamed.

After all, maybe that mystery you’re writing would be Pulitzer prize science fiction! 🙂

3 thoughts on “From Beagles to Books”